Well, it happened. In North Carolina.

It’s happened before, and it’ll happen again, but that doesn’t make it any less horrific. 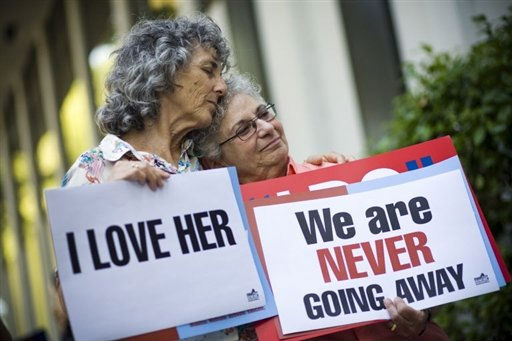 “Marriage between one man and one woman is the only domestic legal union that shall be valid or recognized in this state.”

Notice the wording – not just “we won’t recognize your marriage,” but your union is not valid.

I married, I divorced, I married again. My marriage now is certainly valid, just as my first one was. I, as a heterosexual person, am permitted to marry and divorce and marry again at will, simply because my husband and I have opposing genitals. What if I had no vagina? What if I dressed as a man but still maintained my female parts?

What if I put a dress on Josh, called him Jessica, and tried to marry him in North Carolina? Would they just deny us outright? Or would they ask for physical verification? Is there a pants-dropping section in every city hall in North Carolina?

I grew up a hardcore Baptist. I live in Mississippi. I certainly understand the Bible driven, morality police mindset. For the most part, I think it comes from a not-terrible place. I think the opposition is fairly good hearted and they believe in their convictions.

But while I understand the mindset, understanding does not mean condoning. It’s just not okay.

And whatever beliefs or convictions are behind it, it’s not okay.

I don’t like onions. I hate them, actually, and I wish I never had to encounter them in a salad or a sandwich or my pizza. But other people seem to love them, and so they endure to ruin my life. I’ve accepted this. I do not deny those I love the joy of their stinky, vapory vegetables.

My point is that just because I feel one way doesn’t mean I plan to push those feelings on everyone else.

America is many things – but haven’t we always maintained that above all, we are free? What is more basic than the freedom to commit to someone you love?

In my deepest romantic girly roots, I believe that when you love someone – truly love them – they become the most beautiful thing you can comprehend. And how sad is it if you see that beauty, that breaking off of awe…only to be told that what you feel is invalid?

I want you to believe whatever you want. I want you to support it to the core. But when you try and tell me that I have to abide by your rules, just because…well, I can’t believe that’s the way Jesus would have done it.